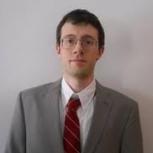 What started the Universal self-consciousness?

42 posts in this topic