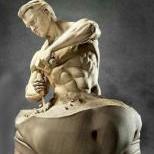 Is there a way to use Enlightenment to speed up life purpose journey?