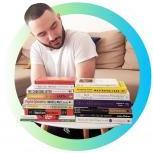 I became enlightened during my last trip. This is what I discovered