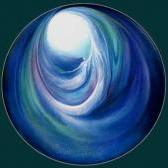 Channeled from God: 'Healing and evolving the emotional body'