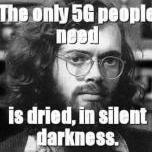 Avoidance of Necessary Suffering is the Root of all Mental Illness