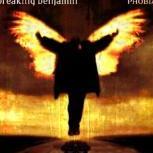 To those people who never get offended or take things personally...