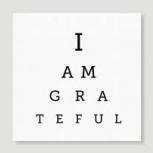 Should I stand by my values even if it doesn’t make me a millionaire?