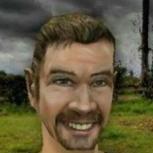 I don't exist. Post of no one to no one! LOL