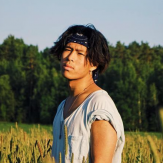 Bentinho Massaro & His Shadows - He could be in some serious shit this time.