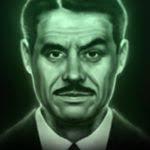 Counter-intuitively, we MUST embrace Russia!!!