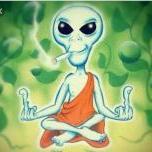 What's your opinion on Islam?

Started by Someone here, January 11