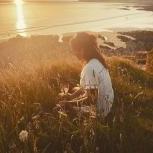 Why does alchohol make me feel so much better?