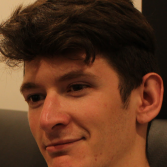 What if consciousness is material, limited in the brain ?