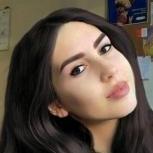 Haha, this survey was interesting! Men VS Women