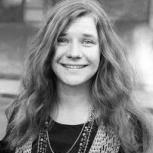 This is how sneaky my ego is. Unbelievable bold.